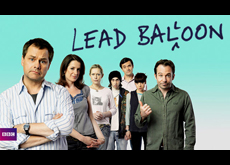 Written by Jack Dee and Pete Sinclair, and starring Jack Dee, Lead Balloon is a sitcom about a disillusioned comedian and writer, Rick Spleen, whose career has not gone to plan. It first aired on BBC Four in 2006 and the first episode achieved the highest ratings for a comedy on the channel. The show ran for four series, moving to BBC Two in series two.