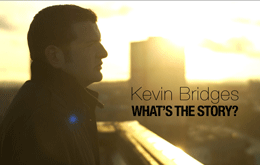 Scottish comedian Kevin Bridges takes to the road in a series of BBC One specials. He sets out to discover the stories behind some of his stellar on-stage material, by looking at his life and the world he sees around him.