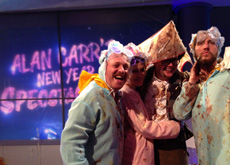 Alan Carr’s Specstaculars celebrate special occasions, including every New Years’ Eve since 2011. There have also been Summer Specstaculars – one broadcast around the Queen’s Jubilee and another close to the Olympics and Paralympics.

In April 2013, Alan Carr’s Grand National Specstacular whipped up interest in the Grand National with a host of celebrities getting involved on Twitter in Alan’s sweepstake promoted on the programme and publicised through the show’s popular social media accounts.